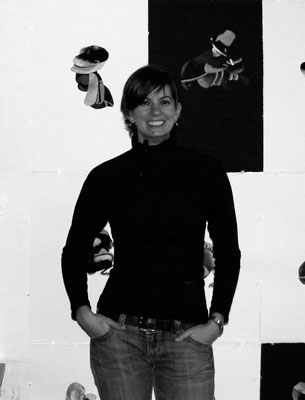 Katherine Sullivan was born in Hamilton, Ontario. She lives and works in Brooklyn, New York and Holland, Michigan.

She received her BFA from the University of Michigan in 1997. In 2001 she received her MFA in Painting and Drawing from Boston University, where she studied with John Walker. Katherine was the recipient of the Richard Ryan Sr. Memorial Award in 2000 and the Graduate Teaching Award in 2000-2001. Additional programs of study include Chautauqua Institute, the New York Studio School, and the Pennsylvania Academy of Fine Arts. The recipient of two Andrew W. Mellon grants and a Fulbright Scholar, she has held fellowships at Cooper Union, the Virginia Center for Creative Arts, and the Wurlitzer Foundation. Recent solo exhibitions include ‘Darshan | Seeing' at Kendall College of Art and Design, ‘Drift Force' at Whitworth University's Lied Art Center, and 'Outlier' at M.F. Husain Gallery at Jamia Millia Islamia in New Delhi.
Loading...